In this party management game you manage a party of gnomes trying to repair an airship. You've crash landed on a frozen island in the middle of an ocean home to a gnome hungry Duke.

The new inventory system is causing some known issues, including failing to remove an item when moved, and attempting to index unknown items. I am working on solutions to these issues presently.

This is where you, the crash landed Gnome, hang out throughout the game as your party explores the island.

There are may activities to do in the Tavern interface. You can:

You can always buy and sell items with Gnomes at the Tavern and mount trophies on the Tavern Wall. When your party is out, i.e. not at the Tavern tile, you may not hire new Gnomes.

Items that Gnomes have for sale will be lost when the Gnome is hired! They do not transfer over.

You will assemble your party throughout the game. The Party interface lets you issue actions to your party and interact with your Gnomes and equip your Gnomes with items from your inventory.

The commands you can issue your Gnomes depend on the location they are in. In most locations you will have the option to search for items and find a place to rest. Locations also have custom actions based on their type and quests, if any are active.

Gnomes do not gain levels as they fight. The only way to make a Gnome more powerful is to give them items. You can always fire weaker Gnomes and replace them with new hires from the Tavern.

To fire a gnome open thee Party interface, click on the Gnome you wish to fire and select Fire. Make sure to remove any items you want to keep before you do so.

Each day your Party will be able to move 4 hexes and perform 1 action. Note that once you perform your action you cannot move further that day. Choose your actions wisely. If your party is damaged find a place to rest, it will boost your defense for the night and let them recover some health.

Actions are not guaranteed to succeed. A failed action will result in your party being attacked.

Your party can be forced into combat in two ways. Either through a failed action, or from an attack in the night. The strength of the enemies you face depend on the location your party is in.

Combat lasts 5 rounds. Each round your party members and enemies are paired off to fight one on one. If one side has fewer members, those members can be attacked multiple times until the side with the greater number has had each of their members fight once.

There are three stats that are key to combat.

Combat autoresolves, so make sure you arm your Gnomes as best you can before you send them out from the Tavern

Quests can be found or bought. Once in your inventory they can be dragged into your use box to be added to your quest tracker. Quests on your tracker will add new actions in locations across the map. They will reward you in loot and gold.

Quests actions have a Q on their top right.

Make sure you pick up your loot after the quest succeeds. Right now you can brick the game if you don't grab items for the main questline.

Not sure what quests you're' doing? Wondering what needs to be done to win the game? Confused about the eye on the right of your screen? No worries, check the Log interface.

The Log interface will tell you the degree of danger you are in, the quests you have dragged into your use bin, and the list of key items you need to get off the island.

Frozen Horizons is my submission to the 2022 Lisp Game Jam. Its source is available on gitlab under the GPL3+ license. The art is available under CC-BY 4.0.

You know the drill. Extract the file and select "Run Anyways" when warned by windows defender.

If you have issues running the AppImage, make sure you have it set as an executable

The new signing requirements make it difficult to distribute for Macs. For now if you want to play it you will have to run the .love file, with the engine downloaded from https://love2d.org/ 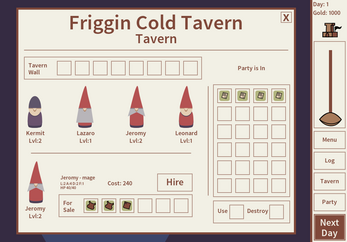 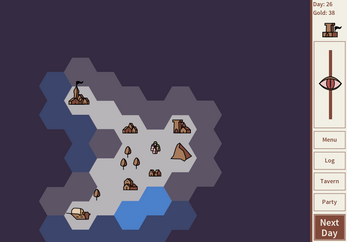 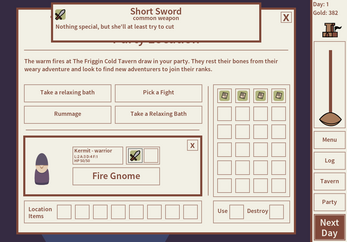 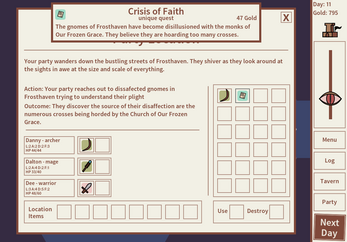 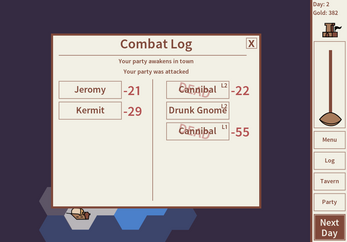 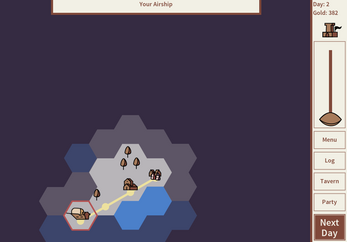